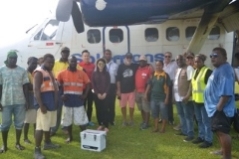 Representatives of the Ministry of Communication and Aviation (MCA), the Civil Aviation Authority of Solomon Islands (CAASI) and Solomon Airlines conducted a test flight with a Twin Otter aircraft on 24th November 2018 to ascertain the readiness of the airport to accommodate flights.

While minor tidy-up work was noted, the pavement rehabilitation was a success and the MCA with CAASI endorsement reopened the airport and Solomon Airlines will re-commence commercial services to Suavanao Airport when they are ready.

Most provincial airports in Solomon Islands have not been maintained for more than 20 years and the current MCA management is addressing that by implementing a Provincial Airport Rehabilitation Programme to improve airport runway surfaces.

The action plan will see the improvement to runway surfaces and lengthening selected airports in the country to accommodate DASH8 services. To date, the MCA has rehabilitated runway surfaces to Seghe, Auki, Parasi, and Suavanao and had recently awarded contracts to upgrade Kirakira with Lata and Tingoa airports and others to follow in 2019.

The MCA and the New Zealand Government are also implementing the Provincial Airport Upgrade Programme and currently completed designs to 4 provincial airports with the possibility of starting with 2 airports in 2019. The scope will involve drainage, pavement improvement and sealing the landing strip.

Due to the very high cost of mobilizing contractors to carry out rehabilitation and limited financial resources available to MCA, the management team explored the option of bringing stakeholders together to share the cost involved.

For Suavanao Airport, a simple Private Public Partnership (PPP) arrangement was agreed on by the National Government through the MCA, the Isabel Provincial Government, and the Private sector through the Mas Pacific International Ltd and a Tourism operator through the Papatura Island Retreat was successful with the completion of the runway rehabilitation works.

The MCA brought parties together in a Memorandum of Agreement (MOA) to share the costs of rehabilitation and which was crucial because without the stakeholders, MCA will not be able to complete the project on time and affecting the travelling public, tourism and the stakeholders themselves.

Under the PPP arrangement, the National Government through the MCA provided overall supervision works and provided compaction equipment along with an expert operator and casual workers. The Isabel Provincial Government provided gravel for all civil works free of charge. The Mas Pacific International Ltd that operates a logging camp next to the airport provided all the equipment for the civil works plus operators free of charge while the Papatura Island Retreat provided all the logistics, transport and supervision on behalf of MCA on site.

Permanent Secretary of the MCA, Mr Moses Virivolomo who also took part in the test flight was happy to see the airport re-opened for the travelling public and overseas visitors to return to Papatura Island Retreat and beyond.

Mr Virivolomo thanked all the parties to the MOA for the partnership and this PPP arrangement will be explored for other airports in line for rehabilitation in the near future.

For the success of the PPP in Suavanao airport, PS Virivolomo thanked his hard working Airport Management team at MCA lead by Chief Operating Officer Mr Sylvester Kenatsi, the Premier of Isabel Province Hon James Habu for assisting the MCA, the Senior Management team for Mas Pacific International Ltd for their great contribution as part of their community service obligations in the province and Papatura Island Retreat owner Mr Peter Blanche for the cooperation in getting the job done on site.

This simple PPP arrangement is first of its kind in the Aviation Sector and MCA believes these simple partnerships should be explored by other sectors as an alternative method to implementing government programs in remote areas of the country where traditional methods of contracting may prove difficult or not cost effective.