Official Press Statements and news updates from the Ministry of Communication and Aviation are issued by The Corporate Service’s Human Resources Unit. This is done in consultation with the Permanent Secretary of the MCA. 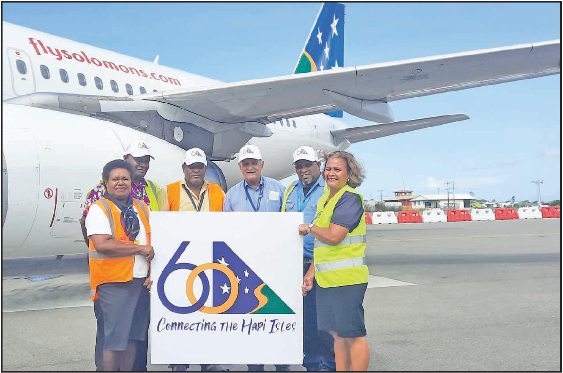 FROM: The Honourable Minister Peter Shanel Agovaka, The Permanent Secretary, Mr. Moses Virivolomo, Staff of the Ministry and Civil Aviation Authority of Solomon Islands, wishes the Chairman, Board of Directors, the Management and Staff of the Solomon Airlines a happy 60 Jubilee anniversary celebration on the 26th -27th October 2022. 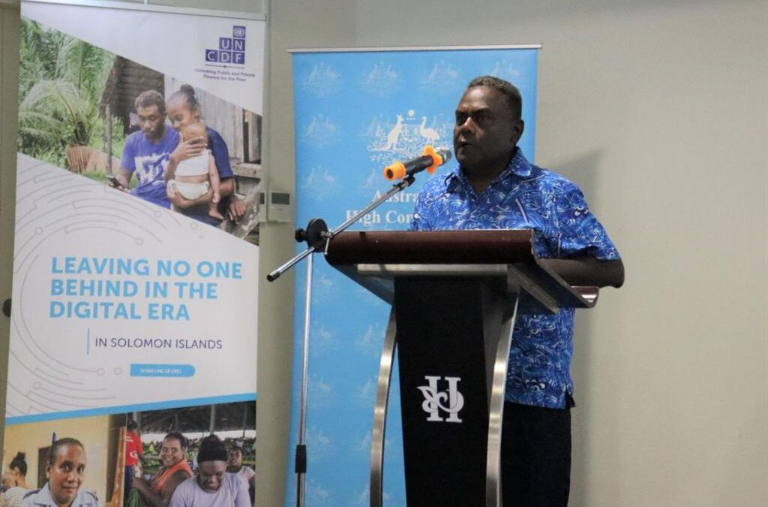 Solomon Islands is on course to improve its digital future as the country’s National E-Commerce strategy was discussed with improvements at a recent two-days validation workshop in Honiara attended by government policymakers and private sector representatives.

Over the two days’ workshop, participants have exchanged ideas and shared perspectives and looked at all aspects of an enabling environment for e-commerce, from digital payments and last-mile logistics to digital entrepreneurship and MSME financing.

Participants have also identified clear indicators to track collective progress over the next five years and have refined some key pilot projects that will kick-off strategy implementation and build momentum across the government, private sector, civil society and development partners.

Permanent Secretary of the Ministry of Communication and Aviation, Moses Virivolomo expressed his confidence that contributions from the workshop have made the strategy more practical, realistic and achievable.

He said the world is going digital and we are part of the global village, which is turning into a global digital village.

“We must embrace e-commerce and the digital economy to support all Solomon Islanders, including our youth, women, and those living in rural areas,” PS Virivolomo said. “I can feel the excitement and enthusiasm for e-commerce development in our country. The digital future for Solomon Islands is promising,”.

Virivolomo updated the workshop that the Ministry of Communication and Aviation, continues to implement projects that will improve connectivity across the country.

“We are rolling out pilot telecentres in Malaita and Choiseul Bay that will provide Internet access and computer labs to community members. We hope these telecentres will provide more than digital connectivity, however; we hope they become places to hold meetings, discuss new ideas, and in the future they could even turn into e-commerce hubs,” he said.

I addition, Virivolomo said “in today’s world, we must move beyond just thinking about digital connectivity. We need to think about how to use this connectivity to improve people’s daily lives through useful digital tools and services”.

Once this National E-commerce Strategy is fully validated and adopted by the Government, efforts will be shifted to strategy implementation in partnership with donor support. 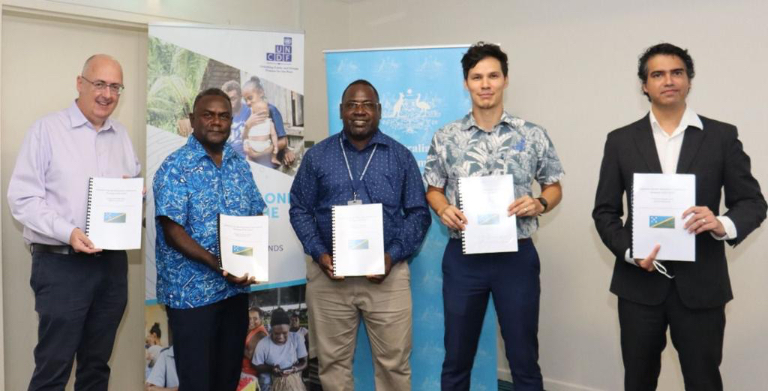 The potential of e-commerce to create jobs and increase business opportunities for SMEs was discussed among policymakers and the private sector at a two-day workshop in Honiara. The gathering was organized by the Solomon Islands Government to finalize its very first national e-commerce strategy. The five-year national strategy provides a vision and roadmap for the development of e-commerce and the digital economy in Solomon Islands.

“The National E-commerce Strategy includes a practical set of activities to improve the business, policy and regulatory environment for the development of e-commerce and the broader digital economy in Solomon Islands,” noted Mr. Riley Mesepitu, Permanent Secretary of the Ministry of Commerce, Industry, Labour and Immigration. “We believe in the power of online commerce to improve the lives of all Solomon Islanders. Online commerce and the digital economy can create jobs, raise incomes and drive innovation”.

Despite high mobile phone usage and growing access to the Internet, online commerce remains very limited in Solomon Islands. In other countries and regions, however, e-commerce has accelerated economic development and opened access to new domestic, regional and international markets for businesses of all sizes. In Fiji for example, e-commerce is providing meaningful jobs for women in rural villages who sell their handmade products to online customers in Fiji, Australia, New Zealand, the United States and beyond.

“This is the power of e-commerce. It allows SMEs to access new markets. It brings rural and urban markets closer together. It reduces business transaction costs and makes it easier to start and operate a new business,” explained Mr. Moses Virivolomo, Permanent Secretary of the Ministry of Communication and Aviation.

“We must embrace e-commerce and the digital economy to support all Solomon Islanders, including our youth, women, and those living in rural areas.”

Australian High Commissioner for Solomon Islands, Dr Lachlan Strahan said “As more Solomon Islanders develop online businesses, this is absolutely the right time for Solomon Islands’ first National E-commerce Strategy. Australia is proud to support its development. People who have smart ideas can get good things done if they have three things: the right tools; a level playing field; and a conducive, enabling environment. This strategy is a part of that mix.”

“This is an exciting time for digital development in Solomon Islands. As the Solomon Islands Government moves towards strategy implementation, we and other development partners stand ready to assist. It is only through collaboration and partnerships that e-commerce will truly emerge and flourish,” noted Mr. Dominic Leong, UNCTAD Regional Specialist on e-commerce and the digital economy. 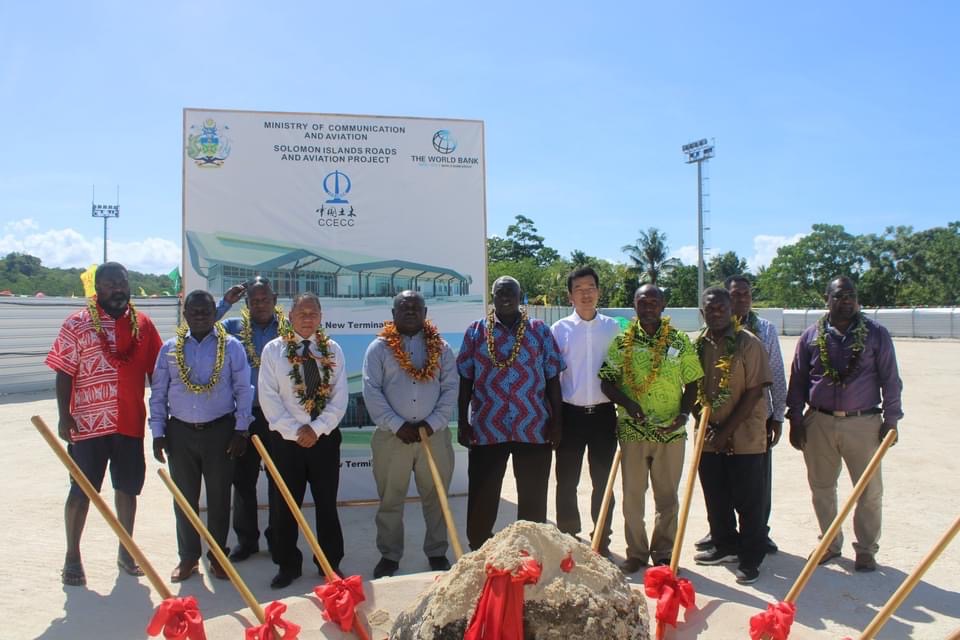 The new terminal building will be constructed at a cost of approximately USD7 million funded the World Bank under and implemented by the Ministry of Communication and Aviation under the Solomon Islands Roads and Aviation Project (SIRAP). The procurement process strictly adhered to the World Banks’ Procurement Regulations.

In 2019, the government obtained financial resources from the World Bank to implement roads and aviation projects under SIRAP and Munda terminal building and Munda airport overlay made the list to be implemented under the project.

The Munda new Terminal Building was procured and awarded to CCECC in 2020 as a Design and Build Project.

CCECC mobilised to Munda in early 2022 and established on site and completed preliminary works including site preparation.

“The construction proper is starting and so this ground-breaking ceremony marks this milestone,” Hon. Peter Shanel Agovaka said during the ceremony in Munda.

Hon. Agovaka who is the Minister of Communication and Aviation led a high-level delegation to officiate the ground-breaking.

“The modern design employs an integrated terminal building serving both international and domestic movements simultaneously thereby maximizing space and optimizing operations within the terminal,” he said.

The new Munda International Airport Terminal is scheduled to be completed by June 2023.

The other component of the project is to overlay the existing Munda airport runway, the apron parking areas and taxiway to 50mm with asphalt material that will add to safety and durability of pavement life to support aircraft operation to the airport. China Harbour Engineering Company (CHEC) has been awarded to implement this component worth approximately USD 15 million and scheduled for completion by May 2023.

Minister Agovaka said the ground-breaking ceremony was a culmination of an achievement forged through partnerships built over the years with local landowning groups, Western Provincial Government, and donor partners.

He acknowledged the Dunde Vetu Bangara landowning group and the United Church of Solomon Islands who severed their land to contribute to the development of the airport.

He also thanked CCECC for showing interest to bid and winning the contract to deliver the new terminal and the World Bank for the funding assistance.

The ground-breaking ceremony marked the continued transformation of Munda airport. In 2012, the New Zealand Government and Solomon Islands Government implemented the Munda Airport Upgrading Project phase I and II to upgrade Munda airport to an alternate international Airport. The upgrade was part of the government’s programme through the Ministry of Communication and Aviation to improve safety, promote tourism and business development in Western Province.

Solomon Airlines operates weekly flights from Brisbane to Munda but has suspended the service as a measure taken by the Solomon Islands Government to manage entry of COVID-19 to the country since early 2020.

However, international flights to Munda are expected to resume when the new terminal completes around June 2023. 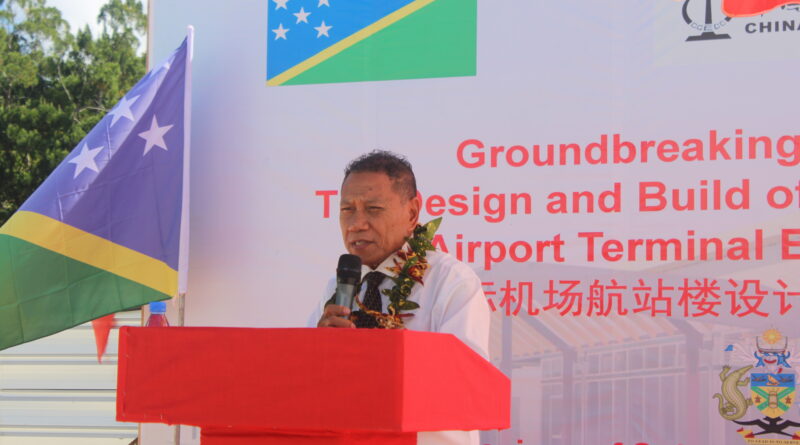 The completion of the Munda International Airport Terminal will boost the tourism sector says the Minister of Communication and Aviation (MCA) Hon. Peter Shanel Agovaka.

He was speaking during a ground-breaking ceremony in Munda on Friday to begin the construction of the new multi-million-dollar terminal.

China Civil Engineering Construction Corporation (CCECC) will begin the construction of the new terminal after it won the bid in 2020 for approximately USD7 million with funding assistance from World Bank through the Solomon Islands Roads and Aviation Project (ISIRAP).

“The upgrade of facilities will bring more business opportunities including increased activities in the tourism sector,” Minister Agovaka said.

“It is also a proud moment for Western Province as hosts for the important infrastructure and we do acknowledge the original landowners for that matter.”

He said upgrade of the Munda Airport in the past years was part of the government’s programme through MCA to improve safety, promote tourism and business development especially in Western Province

Minister Agovaka said the aviation sector is moving in the right direction with 80% of national airports upgraded in driving the government policy of providing access and connectivity for citizens for both domestic and international connection to enable business and trade to grow in a safe environment.

“To my good people of Munda please respect such infrastructures and utilize the business opportunities presented because of these upgrades to facilities.”

He said CCECC will strictly follow the instructions of the Employer and the Engineer, standardize the construction, contribute the wisdom, diligence and sweat of CCECC, and show the spiritual outlook and social responsibility of CCECC.

“We believe that with the care and support of the Solomon Islands Government and Western Province Government, and the care and help of people, we will work closely with the Employer and Engineer to complete the Munda International Airport terminal building project successfully on the premise of ensuring the quality of the project.

“We will continue to establish the reputation and brand of CCECC and make our great efforts and contributions to the infrastructure construction of Solomon Islands,” Mr. Pengfei added.

Amongst those who witnessed the ground-breaking ceremony were Minister of Finance and Treasury Hon. Harry Kuma, Minister of Justice, and Legal Affairs Hon. Clezy Rore and Member of Parliament for West New Georgia-Vona Vona Hon. Silas Tausinga.

Designed by Novus Ltd and powered by Gantry and Joomla!
© 2017 - 2023 Ministry of Communication and Aviation