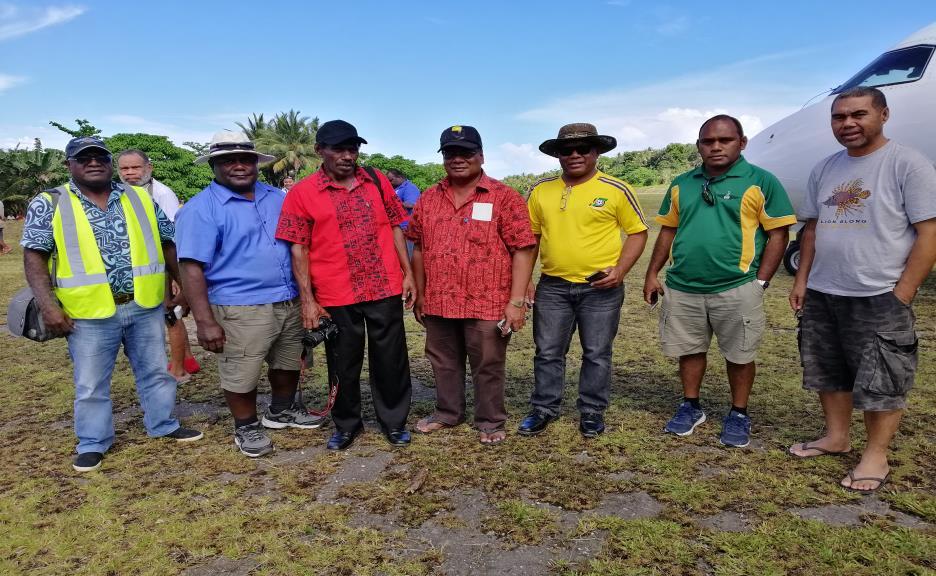 Honiara, Government Communication Unit (GCU): Lomlom airfield, which has been closed for the past 5 years after completion in 2013, is now ready to take-scheduled flights.

This was made possible after the Civil Aviation Authority of Solomon Islands (CAASI), Ministry of Communication and Aviation (MCA) and members of the Airport Task Force made a successful test flight with a DASH8 aircraft to the airfield on Sunday 30th September 2018.

In 2016, MCA set up the Airport Taskforce and mandated it to open 4 closed airports in Solomon Islands namely Gwaunaru’u, Parasi, Manaoba and Lomlom. Within 2 years, the 4 closed airports were opened for the travelling public marking a remarkable achievement.

The Taskforce is led by the MCA and is comprised of members from the Ministry of Infrastructure Development, Ministry of Lands Housing and Surveys, the Attorney General’s Chambers and CAASI.

With very little resources at its disposal the Taskforce was successful because the team visited the people at their homes, listened and took on board their concerns while bringing to light the benefits that the airfield’s communities stand to enjoy when government services and business opportunities are made available through the accommodation of such infrastructure.

For most of the closed airports, the Airport Taskforce were successful in getting the disputing parties to sign an Memorandum of Agreement for air services to resume while their issues and claims are dealt with by the relevant authorities and Government.

For Lomlom airport, the Taskforce visited reef islands earlier this year and got consent from the resources owners there, the Gnaube Landowners Association and Honiara Landowners to arrange a test flight back in August 2018.

The flight, however, didn’t take place when two Honiara based landowners threatened the test flight; however, discussions amongst the stakeholders continued resulting in agreement that all issues related to the airport be dealt with under relevant channels and Government, while flights are allowed to continue services Lomlom. This understanding allowed the test flight to be conducted.

CAASI will liaise with the airlines on issues observed on the test flight and if nothing significant is identified, then Solomon airlines will start their internal processes to be ready for the inaugural flight expected in mid-November 2018.

Chairman of the Airport Task Force, Mr. Moses Virivolomo who is also the Permanent Secretary of the MCA took part in the test flight and was elated to meet with the residents of surrounding communities on landing. The people of the reef Islands have experienced hardships in having to travel by sea all the time to access needed services and do business at Lata and Honiara.

He acknowledged the continuous support by the leaders of the community, resource owners and Ngaube Landowners Association for working with the Government to allow the test flight and thereafter start of the commercial flights to Lomlom.

The Permanent Secretary also assured the resources owners that MCA will work with them to resolve outstanding issues related to the construction of the airport.

Mr Virivolomo added that the re-opening of the airfield is a step in the right direction towards facilitating whatever development aspirations there are, not only for Reef Islands, but also Temotu Province and Solomon Islands generally.

Mr. Virivolomo thanked the tireless efforts put in by the Airport Task Force in negotiating the opening of the airfield with the stakeholders and thanked the taskforce legal advisor the Hon Attorney General Mr. James Apaniai for taking upon himself to travel and sort out issues for all the closed airports and for that the taskforce wished him well on what he does next as he leaves his post by end of October 2018.