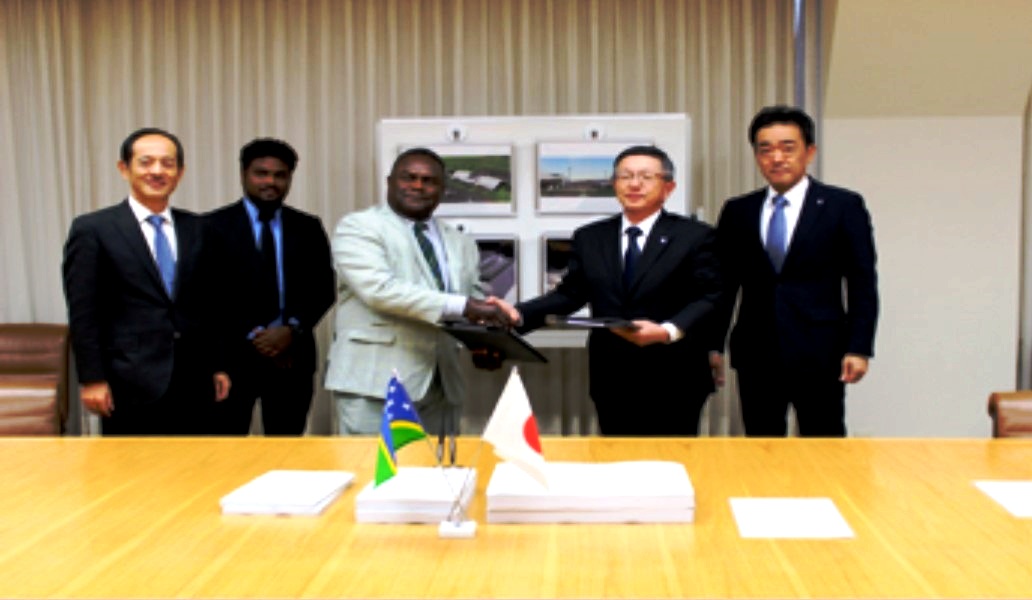 A major contract agreement between the Solomon Islands Government and Kitano Construction Corporation (KITANO) of Japan was signed in Tokyo on Friday 16th November 2019 to begin construction work on the Project for the Improvement of Honiara Airport.

Permanent Secretary of the Ministry of Communication and Aviation (MCA) Moses Virivolomo signed the agreement with KITANO officials in the presence of the Consortium of Gyros Corporation, Ehira Architects & Engineers, Inc. and Oriental Consultants Global Co., Ltd all of Japan (Consultants) and MCA Airport Civil Engineer Raziv Hilly.

The signing was made possible after the Japan International Cooperation Agency (JICA) approved recommendations to award the contract to KITANO after successful contract negotiations in Tokyo last week.

The Honiara Airport has been experiencing increased flights, visitor arrivals and tonnage of overseas cargo but such increase has come with a cost due to congestion and poses safety to airport users and aircrafts due to limited capacity of airport facilities at our busiest international airport.

This project aims to reduce aircraft turn around, provide passenger comfort and improve safety by construction of a new departure terminal, a new taxiway, repairs to existing taxiway, repairs to existing apron and expansion of apron to the west, refurbishment of existing international terminal two-thirds to be used for domestic operations, installation of dykes for flood control, install new generators and install lights as major components of the scope of the project at a cost of approx. USD 33.8 million (JPY 3,681,000,000).

Mr. Virivolomo and his 2-man delegation were beaming with pride to having successfully negotiated and concluded the contract with KITANO with assistance from Consultants and approval of JICA from 11-16 November in Tokyo.

“This project when completed by June 2022 will allow MCA and later the new State Owned Enterprise-Solomon Islands Airports Corporation Limited (SIACL) to safely and effectively manage the increased activity at the Honiara International Airport by improved aircraft turnaround, reduced time delays and cost of trade, and promote Honiara Airport as an efficient airport in our part of the world,” said Mr. Virivolomo.
This is a government priority project and well supported by the current DCGA and will be a catalyst for tourism development and will allow Honiara Airport to become a competitive airport in the region based on our location. The project will be delivered well ahead of the South Pacific Games in 2023 and with the improvements, Solomon Islands should manage the increased arrivals/departures during the games.
Mr. Virivolomo said the increasing assistance by Japan in the Transport Sector through JICA is a very clear sign of the strength of partnership between the two countries.